Yesterday as I was unloading groceries into the back of my van in Wal-Mart’s parking lot, a young man asked if he could take my cart when I finished getting everything out. I assumed he was going to use it himself and wanted to do a good deed at the same time, so I said sure. It was a hot day and that would save me the walk. That’s when I looked up and saw his dark tie, white shirt, and dark pants. He was wearing a small name tag on his lapel that said he was with the Church of Latter Day Saints.

“Great,” I thought, “he’s a Mormon. He caught me off guard while I was looking in the cart or I would have walked away. Here comes the sales pitch.” 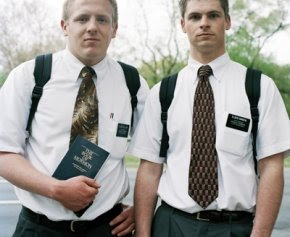 He introduced himself and I introduced myself as Jody, the youth minister at First Baptist Church, hoping that throwing around my religious credentials would dissuade him from trying to convert me. Instead, he surprised me by saying that he hoped I didn’t have anything that would melt on the way home since it was such a hot day. He told me that he was on his two year mission and that he had just arrived in town a couple of months ago. Then he surprised me even more by saying that if I ever needed any help with anything, like mowing my yard, to feel free to ask him or any of the other Mormon missionaries. He gave me a big smile and told me to have a nice day, taking my cart and leaving it in the closest cart return spot. No sales pitch, no argument about how the Book of Mormon is just as important as the Bible, just putting up a cart for someone on a very hot day.

As I drove home, a couple of things struck me about this short exchange. The first was my own lousy attitude in assuming that talking with this guy would be a waste of my time and wanting to avoid any contact with him. I was so wrapped up in myself and what I had to do that I was going out of my way to avoid people who might be “annoyances” instead of seeing people that way that God sees them and looking for opportunities to show love.

The second thought followed quickly behind, “I know why the Mormons are getting so many converts while biblical churches are struggling.” This guy was genuinely nice and helpful. He was friendly and didn’t mind going out of his way to help others. He was spending two years of his life not pursuing an education or trying to get girls, but going to a strange city to help put grocery carts up and share a little about his faith with others. 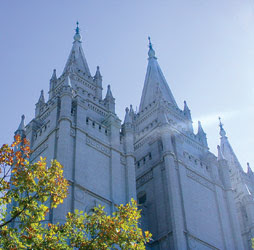 A couple of years ago, Alanna and I went to Salt Lake City and while we were there, we went downtown to the Tabernacle, the headquarters of the LDS Church. Again, I was struck by the friendliness and the willingness to take time and talk with a stranger. How does a stranger feel when they walk into our church? Are they struck by our friendliness or do they leave without being noticed? Do people take time to genuinely talk with them, or is interacted limited to a quick handshake?

When people see Christians out in the world, the malls, the schools, the Wal-Mart parking lots, what impression do we give? I fear that many times, the only thing visibly “Christian” about us when we go out is our bumper stickers. When we witness, do we share ourselves and our God, or do we pass out tracts and read from a script?

It makes me sad when I encounter people like this young man, first because these wonderful Mormon people are being deceived by the enemy, and most Christians don’t care enough to share the truth with them. Even worse, it makes me sad to see how much more effective Mormons are in interacting with the world than most Christians. We must be willing to go out of our way to share our lives with others and show them love. It’s inconvenient. It’s uncomfortable. But for many people, our lives and our attitudes may be the first glimpse of Jesus some people ever see.