Today was an interesting day to buy gas in Middle Tennessee. Many motorists discovered that their favorite fossil fuel was simply unavailable at many of the gas stations across the state. Those who did find stations with a supply often had to wait as long as two hours for a chance to fill up. What happened? How are we suddenly without gasoline? (As a DJ I heard on the radio said, “When did the United States become a third world country?”) 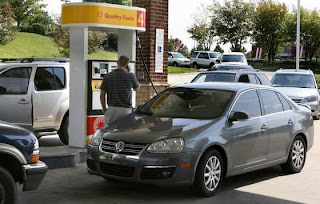 A number of factors led to the “shortage.” You’ll see why I use quotation marks around that word in a moment. It’s true that Hurricane Ike did damage some of the Texas refineries that supply Middle Tennessee gas stations with their fuel. The pipeline that we get our gas from was operating at about 25% of it’s normal capacity so there was definitely less gas than usual coming our way. Along with that, though, one of the chief causes of the problem was panicked motorists who had heard rumors that we were about to be out of fuel and sucked up the fuel supply at almost double the rate of usual sales. Prices soared, tempers flared, and “panic buying” ruled the day.

I’ll admit that I was among the buyers waiting for gas, but not for two hours, just for two cars in front of me. The station I stopped at had set a twenty-five dollar cap on how much gas one person could buy at a time, possibly to keep their doors open for longer, possibly to make sure that everyone was able to get at least a little gas. The guy in front of me in line was obviously not aware of this fact as he attempted to fill up his SUV. When the pump stopped, he stormed into the gas station and began to yell at the cashiers. I couldn’t hear his words from inside my car, but I could see the anger on his face. He made threatening gestures, threw his hands in the air, turned red, and after about five minutes of screaming (probably about the same amount time that he had spent waiting), he stomped out to his car at drove off. What causes people to act like this over a few gallons of gasoline? Are we so dependent on “stuff” that when it’s taken away, or at least not given to us in the amount that we want, we fly off the handle? 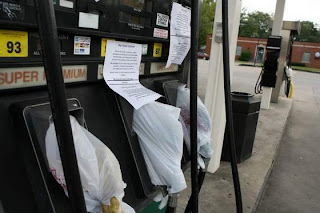 What can we learn from a day like today? First, when rumors run rampant, things can get sticky. Thankfully this time, it was no real problem. Yeah, today a lot of the pumps had plastic bags covering them, but officials say the pipeline should be back at full capacity into next week. We definitely don’t need to take everything we hear at face value and react, but that doesn’t seem to be the biggest issue of the day. All the anger and rage over having what is “rightfully ours” taken away seems to me to be the bigger problem. I understand that for a lot of people that gas was necessary, but most of us could probably stand to conserve fuel more than we do and could definitely get by on less. I also understand that the inconvenience of having to wait for hours at the pump can make drivers get frustrated, but that’s no excuse to blow up. What I don’t understand at all is why having to share with others during what looks like a potential crisis would cause a presumably normal person to have a meltdown.

I think the real source of the problem is not a gas shortage, but an overage of getting what we want too much of the time. Materialism and a sense of entitlement convince us that we “need” many things that we simply want. As Americans, most of us expect that if we have the money, we should be able to buy whatever we want, whenever we want it. When we’re not able to get something we “need,” or even worse, when we have to share with others in need, well… that’s just un-American. But maybe it’s something that Christians need to think seriously about. What are we seeking first: the kingdom of heaven or the American dream?

All the stuff we’ve been given doesn’t really belong to us in the first place and it’s all temporary anyway, so maybe we need to loosen up about it. I seem to remember a very wise man saying something about not serving two masters. Stuff isn’t bad in itself, but how we react to it can be bad. Do we seek after and hoard our stuff or do we see a chance to share? And entitlement? Just what makes us think we deserve any of the stuff we have? Let’s keep stuff in it’s proper place and thank God for the things we do have. Just something to think about next time you’re filling up.