I thought that for a little change of pace on Sunday nights, I would start posting some of my old columns. I wrote a weekly column for the Expositor (Sparta’s local paper) called “Adolescent Attitudes” when I was a senior in high school and during my early years of college. I had a ton of fun with it, and I still have a lot of affection for these old pieces. I’m not sure that anyone can really call any of these “classics,” but since it’s my blog I can do whatever I want. If you read these columns the first time, you can relive the experience. If you’re a first time reader, well, I was an odd young man.

I’m not sure about all the legal stuff with copyright, so I’ll just clarify that I was the original author and these columns were originally published in the Sparta Expositor. 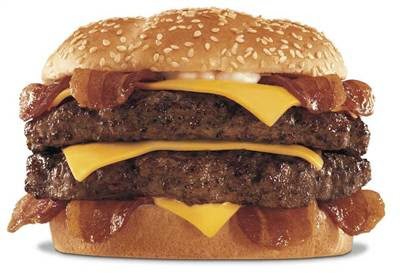 Here’s a little news item from the world of really, really stupid people. In an article in the Addictive Behaviors journal, Yale professor Kelly Brownell has recommended that a special tax be placed on fatty foods and that advertisements for these foods should be restricted. The advertising restrictions would include close examination of advertisements for non-food products to see if they promote unhealthy role models. Additionally, if Brownell’s proposal was to become policy, activities that promote good health would receive government subsidies, and those who participated in these behaviors would receive tax breaks.

This is the most terrifying thing I have ever heard.

First off, I would like to note that for the first time ever in this column, I’m actually doing a little bit of research before writing. Normally, I just write whatever the Column Fairy gives to me as I sleep (She’s been a bit lazy lately), but this time I actually looked up some articles on the internet and verified that I knew what I was talking about. I’m pretty proud of myself. But that’s enough patting myself on the back, on with the stupidity.

The reason why this worries me is because I don’t know if I like the idea of the government taking care of me and keeping me from getting fat. I firmly believe that the founding fathers, when writing the Constitution, had the intention of building a country where people can grow as many chins as they like without fear. This “we’re from the government and we’re here to help” type of policy seems to me to be like a the guy who comes up to you when you’re working out and tries to get you to work out more. I’m perfectly happy going about my life with a certain level of physical activity and a high quantity of junk food. I don’t need the government to tell me I should work out more; I already know that. However, if I choose to reduce my fat intake, I’d like it to be for the reasons everyone else does it – to impress other people and look pretty.

In modern society, people really don’t need to be extremely physically fit. What do most people do on a day-to-day basis that requires them to be in good shape? In ancient times you had to be fit to outrun the animals that were lurking around trying to eat them. That’s motivation! The only thing we need exercise for is so that we can do the exercises. We exercise with weights so that we can lift the weights. After lifting the weights, what do we earn? The right to lift more weights!

Proponents of this “fat tax” compare fatty foods to cigarettes because they say that both are harmful and are marketed knowing the harm they will cause. They call this food tax a “sin tax.” Let me now confess that as a college student, I am apparently the chief of sinners. I don’t know of a single food I eat that is not harmful to me in some way. I have become intimately acquainted with McDonald’s this past year, and everyone knows that eating at Mickey D’s is shining example of healthy living. I can’t help it though! At fifty cents a burger, it’s impossible for a poor boy to overlook. I drink coffee by the bucket, and I’m sure that if they can attack fat, soon caffeine will be somewhere among their targets… and that, my friends, is when they will have gone too far.

Picture this scene if you will. It’s the year 2130. Shiny, happy beautiful people with great bodies are walking down the street smiling perfectly white smiles. They are festively dressed in perfectly fitting clothes (It’s much easier to design clothes for the thin.) in honor of a national holiday. It’s Anorexia Day! Those who have been able to reject not only fatty foods, but all foods, are regarded as heroes. Plus, they get incredible government benefits for taking up this cause. In the midst of this, two men – obviously up to no-good – are talking on the street corner. One hands the other a large sum of money in exchange for a indiscreet brown paper bag. The receiver of this parcel, we’ll call him Winston, glances around nervously and then runs to the shelter of his home. As he unwraps his prize, the smell of beef and cheese float into his nostrils. A cheeseburger! The most beautiful cheeseburger in the world! As his teeth close on this miracle, a knock sounds from the door. The door is flung open – the Fat Police! Winston is knocked to ground as he tries to run and the beautiful meat patty falls to onto the ground, ruined. The five-second rule is not enough.

Fight for freedom. Go get a burger, some fries, fried chicken, ice cream, a candy bar, a plate of nachos, a burrito, a pizza, a medium-rare steak, a plate of enchiladas, a roast beef sandwich, or even just plate of fried eggs and country ham. Make the founding fathers proud.

Have you switched from Internet Explorer to Firefox yet? If not, why not? Firefox is faster, more secure, and, through add-ons, completely customizable. These extensions can change the look of the browser, increase performance, and just do some cool tricks. I switched a while back, and I just keep finding more and more to like about it. I’ve spent the last few days tweaking my toolbar to make it streamlined for my daily use.

I’ve got a few basic navigational buttons, my address bar, Google search, a few favorite bookmark icons, and a drop down menu containing all the elements of the “Menus Toolbar.” This was done through a variety of add-ons. Here are a few of my favorites

So, are you a Firefox convert yet? I resisted for a long time, but after making the switch, I can’t imagine surfing any other way. Download it here. If you’re already using Firefox, what are your favorite add-ons?

At least I used to be a writer until I stopped actively writing on a regular basis. I still have ideas banging around in my head that make me say, “I need to write something about that,” but for the most part I haven’t ever gotten around to any actual writing. I’ve decided that part of the problem (or one of my excuses) is that I haven’t had a real place to do any writing. I’m not a journal writer, writing down my private thoughts for my eyes only. I’ve tried two or three times, but I’ve always gotten bored listening to myself. What I need is other people to listen to me! Hopefully with less boredom.

When I was in high school I wrote a column for my hometown newspaper and I learned the pleasure of writing with an audience. Each week I wrote whatever I felt like writing and people all over the city of Sparta read my column. For a seventeen-year-old with a lot on his mind, it was perfect. Part of it was the fact that people told me they enjoyed my columns (and I am a bit needy, so that was nice) but the thing that I enjoyed most was knowing that my words were going out and people were actually reading them. Unfortunately, I don’t have a newspaper editor asking me to do any writing for them. Fortunately, in the digital age, anyone with a laptop can put their thoughts online for the world to see.

That’s why I’m bringing this blog back from the dead. A few years back, I blogged pretty regularly, but as a young seminary student I felt like all of my posts had to be injected with some kind of deep significance. I debated theology, defended doctrine, and attempted to make myself seem smart and serious. I am neither. I’m more goofy than deep. From here on out, this blog is simply an outlet for a writer who wants to write again. I hope to have some readers who will occasionally be entertained or at least interested in what I have to say, but for now, I’m just happy to have all this blank digital space waiting to be filled up with words.*

*Yeah, that is completely true, but I also really want to have some readers. Remember me saying I was needy? I don’t mind begging a little bit if it gets me a few comments!

I found an awesome steampunk steam ship vs. cyber-octopus picture (courtesy of i09) and I loved it so much that I had to make it my desktop. The artist, Alex Broeckel, does some amazing digital art, and you should definitely check out his gallery. 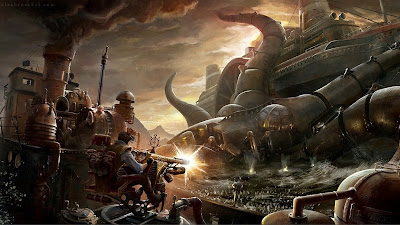 While I was checking out the cool digital paintings, I found this one and made it my boot screen. Gorgeous! Unfortunately, I forgot to bookmark the artist’s page, so I have no idea who did this one. Edit: I found my original link! The artist’s name is Robert Oleotto. 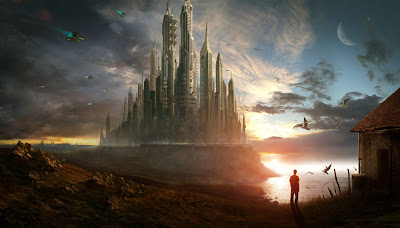 Oh yeah, and this site isn’t dead after two years of neglect. I need an outlet to do some non-church related writing, so I’m back again!