Is anyone else bothered by the fact that several Christian bookstores prominently display and sell this picture? 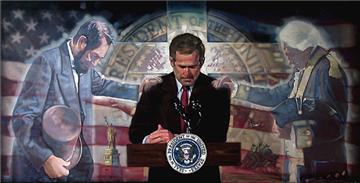 My problem with this has nothing to do with Bush’s politics or personal convictions. I’m sure he’s a nice man. The problem I have is that this particular painting is that it is blatant propaganda for the GOP. Both parties have propaganda, but the Democrats’ propaganda doesn’t carry Christian bookstores’ seal of approval. This painting is being sold in a store whose sole concern should be the kingdom of God. These bookstores also carry books written by Republican politicians George Bush Sr. and Newt Gingrich. You can also buy biographies of Dubya, his dad, and Condoleezza Rice. Since when did being Christian automatically mean being Republican?

I’m not trying to argue against or in favor of the Republicans at the moment. What I’m bothered by is the way that Christianity has become synonymous with a political party. It’s no accident either. In order to gain votes from Christians, the Religious Right has sought to Christianize political parties and policies which they support (i.e. the Republicans) and to demonize political entities which they oppose (i.e., anybody else).When people are told that they are voting “Christian” by voting for Republican Party candidates, it is being insinuated that they are voting anti-Christian by voting for any other candidate.

There are a lot of good Christian politicians who love Jesus and seek to follow his guidance when making political decisions… and they’re Democrats. You shouldn’t be shocked. Former President Jimmy Carter immediately comes to mind. He was outspokenly Christian, even teaching Sunday School in a Southern Baptist Church while President. Believe it or not, many Democrats are not the left-wing liberals that the Republicans have painted them to be. I personally know Tennessee State House Representative Charles Curtiss and can vouch for him when it comes to standing up for his Christian convictions. Many Democrats vote against the party’s official position on values issues while voting with them on more fundamental issues like the economy. (When I say “fundamental” I’m not implying that the economy is more important than values. However, in reality, the basic differences between the parties are their economic views, not values.)

Not all Republicans care about Christian values. Some do, some don’t. The Republican positions are not necessarily Christian positions. Some are, some aren’t. When you’re looking for a candidate who stands for your values, look at the specific person, not just the party. If Christians can’t recognize the difference, then the rest of the world won’t either, leaving the door open for statements made by Pat Robertson and other Republican politicians to be taken as the “Christian” view. Christian bookstores, when it comes to politics, don’t put on blinders and just stock items that make you part of the GOP propaganda machine. The Republicans often make statements that God is on their side, but, as I’ve said before, Jesus was not a politician… and he certainly wasn’t a Republican. And neither am I.